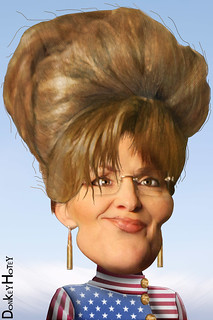 Sarah Palin - Caricature
(Image by DonkeyHotey)   Details   DMCA
Former Alaska Governor Sarah Palin would bring much-needed dignity to the 2016 Republican field, a new poll shows. Despite the overwhelming sense that she would contribute gravitas and intellectual rigor that have been woefully missing from the G.O.P. contest, a Palin candidacy appears unlikely, a spokesman said. “Governor Palin is very flattered by this poll, but she is concerned that being associated with this field of candidates could harm her stature,” he said.
Read the rest of the story HERE: