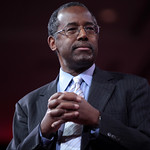 Ben Carson
(Image by Gage Skidmore)   Details   DMCA
In his first public statement since Donald Trump chose him to be the Secretary of Housing and Urban Development, Ben Carson said on Monday that the Bible “makes absolutely no mention of housing or urban development.” Carson said when Trump asked him to accept the post, “the first thing I did was check the Bible to see if there was anything about housing or urban development in there, and much to my dismay there was not. As you can well imagine, I did not want to be in charge of something that the Bible does not condone,” he said. “But then I realized that perhaps the Lord wants me to take this job so that I can banish housing and urban development from the earth.” Carson said he was seeking advice from Trump’s pick for Secretary of Education, Betsy DeVos. “She’s basically trying to do the same thing with education,” he said.
Read the rest of the story HERE: