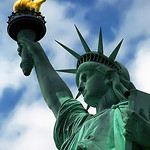 Statue of Liberty
(Image by David Paul Ohmer)   Details   DMCA
Andy Borowitz jokes that the White House has accused the Statue of Liberty of spreading incendiary pro-immigration propaganda, of undermining “everything this country stands for.” Stephen Miller, Donald J. Trump’s senior adviser for policy, made the explosive allegations, calling the French woman “the most dangerous woman in America.” Miller said, “Bringing this incendiary propaganda to our shores was a subversive act on her part, she did not have it when she first came here.”
Read the rest of the story HERE: