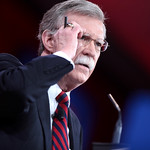 John Bolton
(Image by Gage Skidmore)   Details   DMCA
White House National Security Adviser John Bolton and his deputy are trying to squeeze out U.S. Defense Secretary James Mattis by spreading rumors about his imminent departure, according to two well-placed sources. Bolton and Mira Ricardel, the deputy national security adviser, who has repeatedly clashed with Mattis over Defense Department personnel appointments, believe the defense secretary is “not ideologically aligned” with President Donald Trump’s administration, according to one of the sources, a former senior defense official. The two are trying “to build the sense that he is done for,” the former official said.
Read the rest of the story HERE: