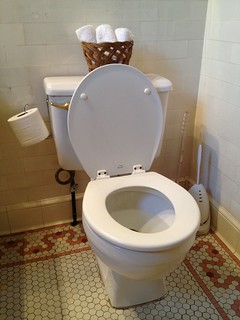 "Maybe Trump really doesn’t  pee. Maybe he outsources that to a Mexican immigrant in his employ," says Frank Bruni, in this must reaf piece which demonstrates what a wacko Trump is; o n Monday he said this of Hillary Clinton’s mid-debate bathroom break: “I know where she went. It’s disgusting. I don’t want to talk about it. No, it’s too disgusting.”He didn’t specify why. But it’s difficult to find anything indecorous about Clinton’s behavior unless you see it as entirely volitional and utterly controllable — something you do to indulge yourself, something that can be put off for hours or forever, an emblem of your weakness. I guess in Trump’s world, only “low energy” people need to go.