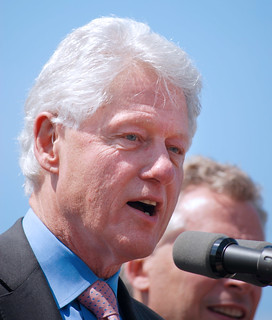 Former President Bill Clinton
(Image by sharedferret)   Details   DMCA
Former president Bill Clinton had a private telephone conversation in late spring with Donald Trump at the same time that the billionaire investor and reality-television star was nearing a decision to run for the White House, according to associates of both men. Four Trump allies and one Clinton associate familiar with the exchange said that Clinton encouraged Trump’s efforts to play a larger role in the Republican Party and offered his own views of the political landscape. The revelation of the call comes as many Republicans have begun criticizing Trump for his ties to Democrats, including past financial donations to the Clintons and their charitable foundation.
Read the rest of the story HERE: