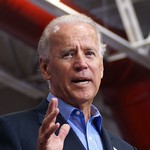 Joe Biden
(Image by marcn)   Details   DMCA
Former Vice President Joe Biden will officially enter the presidential race on Thursday, according to a source close to his campaign. Biden has been flirting with entering the race for months and will begin his campaign in the lead in several surveys nationally and in early-voting states. Biden will announce his candidacy with a video released on Thursday and then will travel to Pittsburgh for a more formal event on Monday, the source said. Biden, who would be 78 when entering the Oval Office if he wins the presidency, faces a crowded field and a number of questions about his candidacy.
Read the rest of the story HERE: