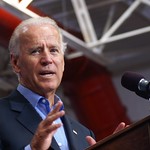 Joe Biden
(Image by marcn)   Details   DMCA
Former Vice President Joe Biden launched his third bid for the presidency, positioning himself as a trusted champion of the middle class eager to take the fight to President Donald Trump. In a video released early Thursday morning, Biden said that "we are in a battle for the soul of this nation." Biden's first public scheduled event will come Monday afternoon in Pittsburgh, where he will speak to members of the Teamsters union about rebuilding the middle class. He'll then travel to early primary and caucus states before wrapping up his launch week back in Philadelphia, where advisers say he lay out a vision bringing Americans together in a polarized time.
Read the rest of the story HERE: