Joe Biden reached a new and heady milestone when he shellacked Bernie Sanders in Florida, Illinois and Ohio to become the de facto Democratic nominee for president.

But there was no soaring speech to acknowledge the moment... Biden was instead stuck in a makeshift studio in his Delaware home, webcasting his remarks with a low-quality personal computer camera against a straight-out-of-YouTube black backdrop and two American flags.

The moment was a perfect distillation of Biden’s current predicament — in a state of suspended political animation, trapped between a rival who refuses to quit and the global pandemic that has all but shut down the Democratic primary campaign...

Because Sanders won’t quit, Biden can’t fully pivot to the general election...  Nor can he begin stockpiling the vast amounts of money he’ll need for November. His momentum has effectively been stopped cold. 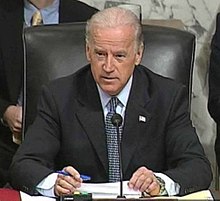