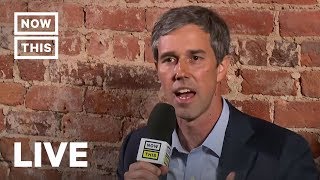 Beto O'Rourke Announces New Voting Rights Policy at Town Hall | NowThis Beto O'Rourke is rolling out his new voting rights policy at a town hall in Atlanta, GA. He'll also be talking with voters about the state's abortion ban, economic ...
(Image by YouTube, Channel: NowThis News)   Details   DMCA
“Even if Democrats manage to retake the White House, a Senate majority stands between them and the ability to pursue any real legislative agenda. Without the Senate, Democrats’ ideas will remain pipe dreams.” Vox’s Tara Golshan and Ella Nilsen wrote, and that 4 different Democrats are running longshot presidential campaigns rather than running for Senate: O’Rourke and Julian Castro in Texas; Steve Bullock in Montana; and John Hickenlooper in Colorado. “It’s worth noting that filing deadlines for Senate in many states happen in the fall — the same time the presidential field starts to winnow.  These longshot presidential candidates will change their minds if they don’t gain traction.