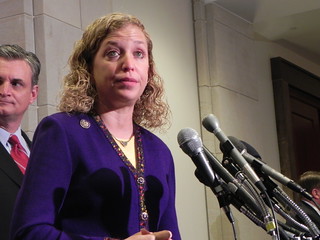 Debbie Wasserman Schultz
(Image by Medill DC)   Details   DMCA
The latest controversy roiling the Democratic Party showed no signs of abating Wednesday, as Bernie Sanders’ campaign put the onus of the rift splitting Democrats on Debbie Wasserman Schultz’s failed leadership, accusing her of “throwing shade” on the Vermont senator from the beginning. Sanders’ campaign fired back at Wasserman Schultz on Wednesday morning after the Democratic National Committee chairwoman panned the campaign’s “anything but acceptable” response to reports of violence and threats from Sanders supporters at the Nevada Democratic convention over the weekend.
Read the rest of the story HERE: