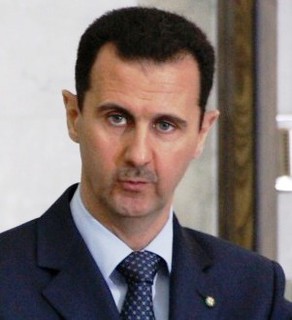 Bashar Assad
(Image by FreedomHouse)   Details   DMCA
Bashar Assad's presidency looks likely to outlast Barack Obama's. As the United States has turned its attention to defeating the Islamic State group, it has softened its stance on the Syrian leader. More than four years ago, Obama demanded that Assad leave power. Administration officials later said Assad did not have to step down on "Day One" of a political transition. Now, they are going further. Syria was the focus for Secretary of State John Kerry as he headed to the United Arab Emirates on Sunday for talks with government leaders. Many more discussions with Arab officials are planned over the next months. Some Western diplomats have begun talking about the possibility of Assad staying on indefinitely as a ceremonial president, though stripped of his control over the nation's security and intelligence apparatuses.
Read the rest of the story HERE: