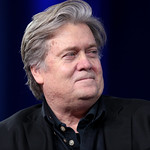 Steve Bannon
(Image by Gage Skidmore)   Details   DMCA
Deputy Attorney General Rod Rosenstein is “clearly obstructing justice” and should be fired if he does not produce documents sought by Congress, President Trump’s former chief strategist Stephen Bannon has told The Hill. Trump should order Rosenstein to turn over all documents sought from the Department of Justice within 72 hours, Bannon said. “If he doesn’t do it in 72 hours, he’s fired. I’d fire him.” The Mueller investigation has already resulted in more than 30 people being indicted. Five of those people have pleaded guilty. The first trial to result from the probe — that of former Trump campaign chairman Paul Manafort — has just begun.
Read the rest of the story HERE: