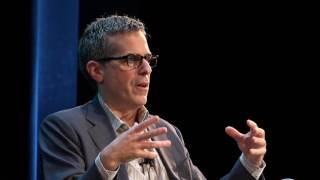 Jonathan Lethem Jonathan Lethem is one of the most colorful novelists writing today. Like Dickens, he writes stories filled with memorable figures, offering pathos and absurdity in ...
(Image by YouTube, Channel: Chicago Humanities Festival)   Details   DMCA

Trump and his movement’s lies, cruelty, disregard for facts, and assault on America’s political norms and rules are disorienting. The American body politic is sick and overheating as it tries to fight off Trumpist poison. A man who publicly colludes with a hostile foreign power to subvert an election, and then lies about and obstructs justice should have been immediately impeached and removed from office. Yet Trump may well be re-elected in 2020.

As public opinion and other research shows. Trumpists and others who live in the president’s orbit have created their own reality around the persona of the Great and Dear Leader. The rest of America and the world live in empirical reality, the world as it actually exists: they understand Trump and his movement to be a disaster and an embarrassment, a rebuttal to human progress and a celebration of the retrograde, the backward and the ignorant.