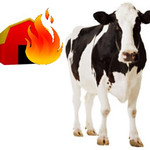 Australia's CSIRO has identified a strain of seaweed that can reduce bovine methane emissions by more than 99 percent if added to cow feed in small amounts. This could be huge for climate change, but it also has significant benefits for farmers.

For more than a decade, researchers have been aware that adding seaweed to a cow's diet made a significant reduction to that methane release, leading to cleaner agriculture and better meat production. Early tests found seaweed could cut back methane release by as much as 20 percent.