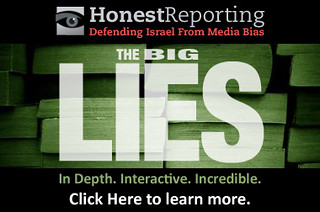 The Big Lies
(Image by HonestReporting.com)   Details   DMCA
'More than 3 decades AGO,  Bernie Sanders made no secret of his contempt for commercial TV.  It was not just a profit-making enterprise, he said 1979 issue of The Vanguard Press, but an opiatelike vehicle to subjugate the masses with “lies and distortions. And that was just the news programs. Commercials employed “Hitlerian” tactics in which the public is “bombarded” with short, simple messages in keeping with the owners’ mission to “create a nation of morons who will faithfully go out and buy this or that product, vote for this or that candidate.”  Anyone who, in the 1960s,  read Vance Packard's 'The Hidden Persuaders' are not surprised, but it is time THE current media propaganda IS RECOGNIZED as creators of fear-mongering and promoter of  lies that was prevalent in 1939 Germany.
Read the rest of the story HERE:

Series: "The Media: what it does and doesn't do"