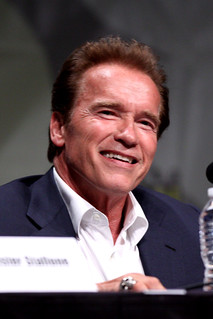 Arnold Schwarzenegger
(Image by Gage Skidmore)   Details   DMCA
Arnold Schwarzenegger has been named the new host of Celebrity Apprentice. The news comes a few months after NBC severed ties with Donald Trump, the reality competition's original and former host. While his White House run may have contributed to Trump's early consideration of stepping away from the franchise, NBC made it clear that it was his racist, derogatory comments about Mexicans and immigration that caused them to dissolve their relationship with the real estate magnate.
Read the rest of the story HERE: