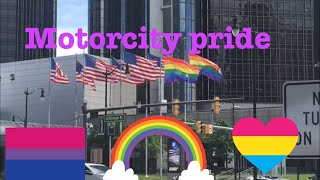 Motor city pride Pride month is the most magical month of the year. I'm proud of who I am and so should every else. If you want to see just a bit of what pride is about, watch my ...
(Image by YouTube, Channel: Nikki Gabrielle vlogs)   Details   DMCA

Neo-Nazis were seen ripping apart a rainbow flag and another photographed urinating on an Israeli flag, according to The Hill. Videos from the event showed protesters marching through downtown Detroit during the Motor City Pride festivities with a police escort. Some expressed their frustrations that “Detroit PD escorted Nazi’s in full uniform outside of the entrance to the festival. Detroit PD bruised those that tried to intervene and allowed this to happen.” One voice in a video is heard shouting; “Why are you protecting them? These are literal Nazis.” “How come they get protected and we’re not,” shouted another. “Our police should be protecting us.” “I do not see the n—–s, homosexuals, Mexicans, Jews, or even child molesters ashamed or afraid to speak their minds and rally, march, post, and be activists for their sick cause,” wrote former NSM member, J.T. Ready, in a 2008 blog post.