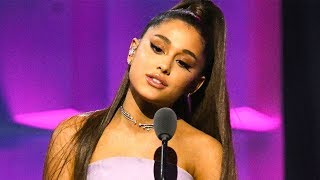 Ariana Grande Reveals A Grammy Performance We've Been Waiting For | Hollywire sunsetstrand.com/ EVERY PURCHASE WILL GO TOWARDS OUR CHARITY FOCUSED ON PRESERVING OUR BEACHES Ariana Grande did not ...
(Image by YouTube, Channel: Hollywire)   Details   DMCA

Every vote count in politics, but if a person has more than 60 million twitter followers, that vote might count for more than others.

Bernie wrote “I want to thank Ariana Grande for not only being a wonderful entertainer but also for being such an outstanding advocate for social justice. We must be prepared- like Ariana has shown – to fight for everyone who is struggling. It was great to meet her in Atlanta last night.”

Last year to Elle magazine Grande said, “There’s a lot of noise when you say anything about anything. But if I’m not going to say it, what’s the f***ing point of being here?”.
Mr. Sanders, who also posted the image, attended her gig in Atlanta, Georgia, which was also the venue of the fifth Democratic Party debate.