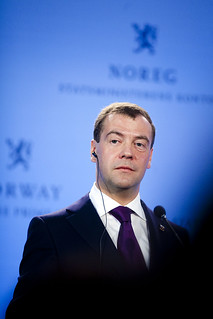 Russlands president på besøk i Norge
(Image by Utenriksdept)   Details   DMCA
Some Turkish officials have ‘direct financial interest’ in the oil trade with the terrorist group Islamic State, Russian PM Dmitry Medvedev said as he detailed possible Russian retaliation to Turkey’s downing of a Russian warplane in Syria on Tuesday.  According to the PM, Russia is considering canceling several important projects with Turkey and barring Turkish companies from the Russian market. Russia has already recommended its citizens not to travel to Turkey, citing terrorist threats, resulting in several tourist operators withdrawing tours to Turkey from the market.
Read the rest of the story HERE: