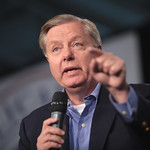 Four Republicans said on Tuesday they would seek to overturn parts of a $38 billion military aid agreement with Israel, setting up a showdown with President Barack Obama over the package days after it was signed. Senators Lindsey Graham, Kelly Ayotte, John McCain and Ted Cruz told a news conference they wanted to add a measure giving Israel an additional $1.5 billion in military aid to a bill expected later this year to renew U.S. sanctions on Iran. The four senators also object to Israel’s agreement to return any money if Congress tries to send it more than $3.8 billion per year before then. Graham also said he would introduce legislation to overturn a provision in the agreement that phased out a special arrangement that has allowed Israel for decades to use 26.3 percent of the U.S. aid on its own defense industry instead of on U.S. weapons.