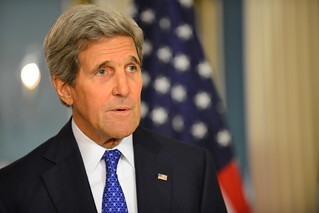 Secretary of State John Kerry
(Image by U.S. Department of State)   Details   DMCA
Secretary of State John Kerry said on Sunday he and his Russian counterpart Sergei Lavrov had reached a provisional agreement on terms of a cessation of hostilities in Syria and the sides were closer to a ceasefire than ever before. But he indicated there were still issues to be resolved and he did not expect any immediate change on the ground. Violence continued to rage in Syria on Sunday. Multiple bomb blasts in a southern district of Damascus killed at least 62 people, while twin car bombs killed at least 57 people in Homs, the monitoring group said. The Russian Foreign Ministry seemed to stop short of Kerry’s announcement. The ministry said Lavrov and Kerry spoke on the phone Sunday for a second day in a row and discussed “the modality and conditions” for a cease-fire in Syria that would exclude groups that the U.N. Security Council considers terrorist organizations.
Read the rest of the story HERE: