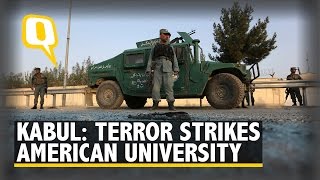 Attack on the American University of Afghanistan
(Image by The Quint, Channel: The Quint)   Details   DMCA

At least 13 people were killed and dozens more wounded in an overnight raid on the American University of Afghanistan in Kabul, officials said Thursday. The seizure of the university, which began Wednesday night and lasted until early Thursday, was described by one educator as an attack on the country’s future that has robbed Afghan students of their hope. No one has claimed responsibility for the attack. The assault was launched about 7 p.m. Wednesday at the high school, which shares the university’s southern wall. The attackers had rammed a metal security gate on Darul Aman Road, killed a guard and detonated a car bomb next to the shared security wall.