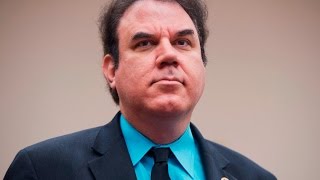 Alan Grayson
(Image by Secular Talk, Channel: Secular Talk)   Details   DMCA
Florida Rep. Alan Grayson, a liberal gadfly who once branded Republicans as “Jesus freaks,” has now married the woman who wants to take his seat Congress when he runs for the U.S. Senate seat now held by Marco Rubio. Grayson’s newly minted wife, Dena Minning, has been plotting a run for the Orlando-area seat for at least a year. Drama seems to follow Grayson, who was the first Jewish lawmaker to back Bernie Sanders. Earlier this year an ethics investigation into his dual role as a hedge fund manager and Senate candidate prompted his campaign to snub the actions as a “political witch hunt.”
Read the rest of the story HERE: