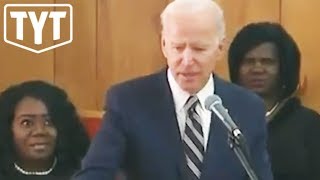 Joe Biden's LIES About Involvement In Civil Rights Movement Joe Biden is lying about his involvement in the Civil Rights Movement. Ana Kasparian and John Iadarola, hosts of The Young Turks, break it down. Tell us what ...
(Image by YouTube, Channel: The Young Turks)   Details   DMCA
Shaun King, a prominent Sanders surrogate for Sanders drew attention to Biden’s statements about what role he played in Delaware’s racial struggles. During Biden’s ‘87 run, he described himself as a teenage civil rights activist, only to withdraw those claims later. More than three decades later, having served under the first black president, Biden now describes himself as a participant in desegregation protests. King highlights inconsistencies in Biden’s claims that he was involved in the struggle to desegregate movie theaters in Delaware in the 1960s, accusing him of lying to curry favor with black voters.

Joe Biden wasn’t selected as a running mate for Obama because he was a civil rights activist,” JA Moore, a state representative from Charleston, South Carolina, who attended a Biden event on Tuesday told the New York Times. “It was because he was a safe white choice.”

And what about his alliances with Anti-Busing Segregation Senator Strom Thurmond?