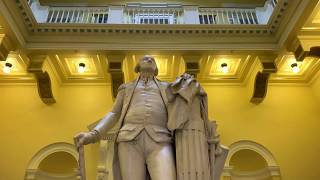 Virginia: State Capitol The Virginia State Capitol is the seat of state government of the Commonwealth of Virginia, located in Richmond, the third capital city of the U.S. state of Virginia.
(Image by YouTube, Channel: Fenway Leo)   Details   DMCA

After gaining control, Virginia Democrats unveiled voting/election reform bills for January's legislative session, loosening GOP's voter ID law by removing photo ID requirement, allowing other forms of ID (bank statement or utility bill). A 2nd bill removes the requirement to vote absentee by mail; & a proposal expanding in-person absentee voting to two weeks before Election Day, up from the current one week. Another lets 16- and 17-year-olds pre-register to vote and automatically added to the rolls once they reach voting age, which in Virginia is 18; 1 bill creates a pilot program for same-day registration, which may have the greatest potential to increase voter turnout. Research has shown that it can help make the electorate more demographically representative of the eligible voter population by making it easier to vote for young people in particular.