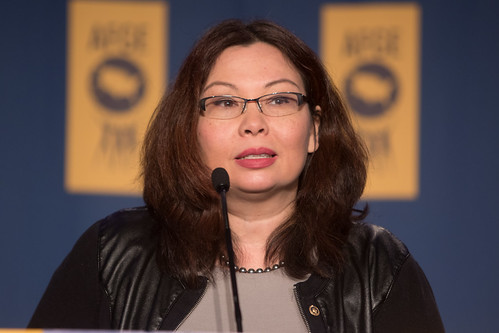 Infant Maile Pearl Bowlsbey is helping force more change in the Senate than most seasoned lawmakers can even dream. She's doing it with her mom, Sen. Tammy Duckworth (D-IL). Duckworth gave birth to Maile, her 2nd child, on April 9, and wants to keep her newborn nearby when she's doing her job as a senator. That required a change in Senate rules that typically allow only senators and a handful of staff into the Senate chamber during votes. On Wed. the Senate unanimously agreed to allow senators to bring their infant along to votes until the child reaches 1 year old. In response to the change, Duckworth thanked her colleagues "for helping bring the Senate into the 21st Century by recognizing that sometimes new parents also have responsibilities at work." Her statement added, "These policies aren't just a women's issue, they are a common-sense economic issue."