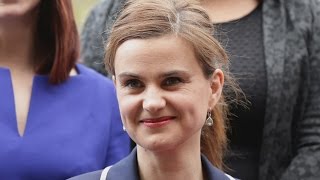 Murdered British MP Jo Cox
(Image by ODN, Channel: ODN)   Details   DMCA
The man charged with shooting and stabbing to death a rising star of British politics gave his name Saturday as “death to traitors, freedom for Britain” during his first court appearance since the killing stunned this nation on Thursday. Thomas Mair, 52, made the comment when a judge asked for his name in a London magistrate’s court. Mair was officially charged Saturday with the murder of Jo Cox, a 41-year-old member of the center-left Labour Party who had been an outspoken advocate for refugees, immigrants and Britain’s continued membership in the European Union. Mair’s statement adds considerable weight to the theory that Cox’s killing was a politically motivated, far-right attack just a week before Britain is to vote on the highly contentious question of whether the country should stay in the E.U.
Read the rest of the story HERE: