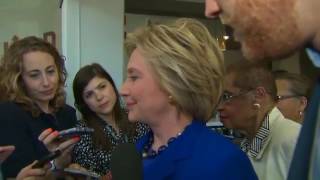 The reporter in a video being thrown around by “Hillary Health” conspiracy theorists is debunking the idea that Hillary Clinton may have had a “seizure” in that video. This mostly stayed online until Sean Hannity went ahead and mainstreamed it for what turned out to be a whole week of playing up conspiracies about Clinton’s health, including asking medical experts if Clinton’s head movement there might be signs of a seizure. Well, the reporter in that video, AP National Politics Reporter Lisa Lerer, is responding to all that nonsense.