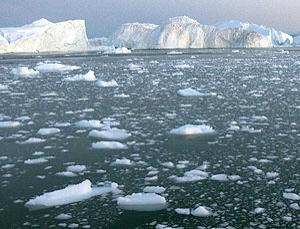 'The sharp decline in Arctic sea ice area in recent decades has been matched by a harder-to-see, but equally sharp, drop in sea ice thickness. The combined result has been a warming-driven collapse in total sea ice volume — to about one quarter of its 1980 level.Unfortunately, what happens in the Arctic does not stay in the Arctic. The accelerated loss of Arctic sea ice drives more extreme weather in North America, while speeding up both Greenland ice sheet melt (which causes faster sea level rise) and the defrosting of carbon-rich permafrost. Our carbon pollution is the cause. And those climate science deniers who have blocked aggressive action to reduce emissions have made it all but inevitable that continued warming will drive the Arctic’s summer sea ice to near-total destruction.'