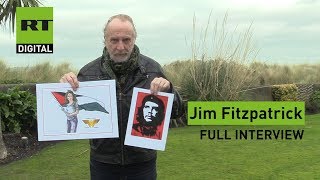 FULL INTERVIEW: Jim Fitzpatrick - From 'Viva Che' to reclaiming Wonderwoman Inspired by the story of Palestinian teenager Ahed Tamimi, who was jailed for slapping a member of the IDF, 'Viva Che' creator Jim Fitzpatrick is hoping that by reinventing the ic
(Image by YouTube, Channel: RT)   Details   DMCA

Jim Fitzpatrick, the artist famed for creating the iconic 1967 poster of socialist revolutionary Ernesto ‘Che’ Guevara,  has focused his lens on Ahed Tamimi, the teenage Palestinian activist who slapped an Israeli soldier in December last year and faces up to 10 years in prison. Angered by the 17-year-old’s detention,  Fitzpatrick turned to his weapon of choice — paint —  to create an image of Tamimi entitled ‘There Is A Real Wonder Woman.’ Donald Trump’s recent decision to officially recognize Jerusalem as the capital of Israel has led to heightened tension in recent weeks, beginning with protests throughout the Muslim world and beyond. It was amid these protests that the Israeli soldiers paid Ahed Tamimi a visit. Her mother caught the incident on her phone and it soon went viral.