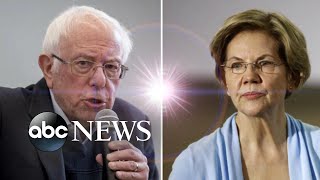 Bernie Sanders, Elizabeth Warren vie for top spot l ABC News The 2020 Democratic candidates have jostled for the lead position ahead of the next high-stakes debate as Sen. Cory Booker announced he will drop out of the ...
(Image by YouTube, Channel: ABC News)   Details   DMCA

When Bernie pitches you, please listen. Here is my cold-blooded calculation. My fellow moms and I will show up in November, no matter who’s on the ticket; I fear the youth are not. If your child is eligible to vote, he or she is much more likely to vote if Bernie is on the ballot. Your choosing Bernie helps your kid choose him later. If your child is too young to vote, think about what he or she most cares about. Climate change? Health care? Student debt? Think about which candidate wants to make real change in that area.