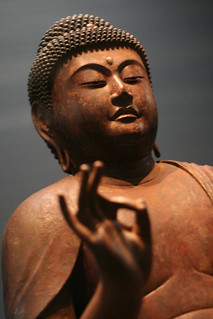 Buddha Statue, Tokyo National Museum
(Image by fakelvis)   Details   DMCA
If there’s one thing we know beyond any doubt, it’s that all of life is an evolutionary process. Everything, from the smallest particle in existence to the universe as a whole is in the process of evolution. Immutability is the only truth. Expansion is the point. The only question is whether or not it’s happening consciously or unconsciously. As is the case with any pursuit — whether athletic, intellectual, or spiritual — certain signs will begin to show up after a particular amount of practice has been put in, and they will come out, as they should, in your behaviour. As with all things, practice makes perfect. Here are 5 behaviours that show you are reaching a higher level of consciousness.
Read the rest of the story HERE: