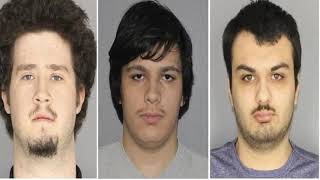 At the time of their weekend arrests, the men, three of whom were in Boy Scouts together, had access to 23 rifles and shotguns and three home-made explosives, Greece Police Chief Patrick Phelan said at a press conference. “I don’t know that there was a specific date. They had a plan in place."

It was a lunchroom comment by the student during school Friday that launched the investigation.

“He looks like the next school shooter, doesn’t he?” the student allegedly said while showing students a picture of another boy on his phone, according to Phelan.

A student who heard the comment “did what we teach kids to do and told somebody,” the chief said.

School security and Greece police interviewed both students and others and eventually uncovered … a plot to attack an Islamic community in Delaware County, known as Islamberg.