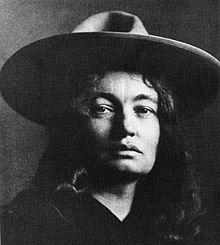 She wrote about the Mojave as brilliantly as John Muir wrote about the Sierra. Why was she forgotten? To understand Mary Hunter Austin, you must first imagine her walking. She would have cut an eccentric figure, sailing across the deserts of California in the 1890s in her long, swirling dresses, following the tracks of coyotes, observing the movements of small mammals, cataloging the habits of plants and water and wind.  She took rides from strangers to unknown destinations, claiming a freedom that, at the time, for a woman, was considered brazen at best. By that time, in her twenties, she had probably already jettisoned the corset that bound her so that she could breathe and move. Austin’s dozen years in these harsh lands produced a small volume, The Land of Little Rain, now considered an environmental classic.