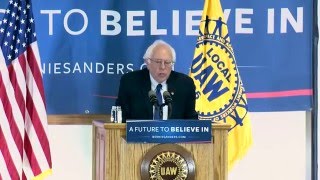 Unions are my Family | Bernie Sanders .I'm not a candidate who goes to the unions, goes to workers and then leaves and goes to a fundraiser with Wall Street. You are my family. I have worked with ...
(Image by YouTube, Channel: Bernie Sanders)   Details   DMCA

The letter, from “IBEW Members For Bernie,” blasts the union’s leadership for endorsing Biden without a vote of members. “The leadership of the union had previously provided reassurance to the membership that they would trust the judgement of rank-and-file leaders and members to  represent their own interest in the 2020 primary; we are disappointed that the International has instead thrown their weight behind Biden without member consultation,” it reads. The letter says that those who sign it support Sanders’ “transformative vision for expanding the labor movement, as well as the democracy and the solidarity that his campaign embodies, concluding: “We are calling on the International Officers to immediately retract their endorsement and call for the rank-and-file to participate in a democratic endorsement process by participating in an in person vote at their March local union meeting.”