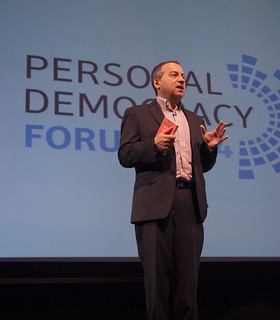 Micah L. Sifry is a democracy activist, cofounder and Editorial Director of Personal Democracy Forum, one of my favorite conferences for smart people and cutting edge innovation, and the author of numerous books, including Wikileaks and the Age of Transparency, The Big Disconnect, Why the Internet Hasn't Transformed Politics (Yet) and, most recently, co-editor of A Lever and Place to Stand.

Rob: PDF Personal Democracy Forum is an amazing conference. Tell us about it.

Back in 2004 when we started, the Dean campaign.. suggested that maybe th internet could democratize Democracy. j

There were legal hindrances to government using social media.

The Arab spring and revolutions around the world showed that this " technology " and media" is here to stay.

Benevolent govts. say "we don't have to worry about us."

Rob: And you're holding conferences in Europe and South America"

we have companion PDF groups in Warsaw and Paris and Rome. We tried one year to do a pan american one in Santiago"

Rob: I love the idea of tech for public good-- kind of like change.org's expansion from progressive to making good happen.

Rob: you've been able to bring in the political while keeping out the ideology.

When it comes to people who are at the cutting edge technology, there is a distinct tilt towards the left, at least on social issues. " It's hard to find really brilliant techies who are also virulently anti-gay. For the most part you have a more progressive social tilt for/

Rob: What is your idea of what bottom-up is?

I've stopped using the "up" Where does authority come from.

the power may be somewhere else. Moveon " controls"

Rob: What is your vision of what bottom-up is at its best.

There's the problem of electing people, of getting laws to change, of making my city work better, fix my street..

If the problem you're trying to solve is get this guy elected" then you could argue that the Obama campaign did in 2008 and 2012 was completely appropriate. They didn't care if they were expanding the local capacity in Ohio, Florida, the states they contested very hard.

Rob: Quote from page 71 on Myth of the Obama Campaign as a bottom-up enterprise".

Rob: you cite Jessica Shearer as saying the Obama team "kneecapped" their grassroots after the 2008 victory. And my read of your book is that it was Rahm Emanuel who killed it.

the problem is psychological not just technological" the people who volunteered and gave money did not have to give up" over 100,000 were interested in running for local office. The question is what happened " You can't just blame it on Obama. The answer is this inbred passivity-- we elected a good guy, now he'll take care of things. This is where the myth of technology has to be kicked away. Technology doesn't do anything for us. It's what we do with technology"

Rob: What's the big message that THE BIG DISCONNECT, WHY THE INTERNET HASN'T TRANSFORMED POLITICS (YET)

We need to worry about two things

1- the internet is particularly good at stop and not all that good at go.

Getting people together to stop something that they already agree about.. execution, stop Mubarak as head of Egypt-- we're good about that. But when we don't agree, and we need to ". agreeing becomes much harder, We have a surplus of talk and deficit of listening. Everyone says you can't drink from the firehouse that Twitter has become. While the future is here, it is breaking the present, breaking our ability to focus and " All these apps and beautiful toys made by companies like Apple are designed to be incredibly addictive--- we get a burst of dopamine every time we put something on Instagram. The temptation to check again is highly reinforced. As a society I think we are being whipsawed now from spectacle to spectacle.

Right now the particular set of tools, and apps". is hurting us rather than helping us as much as they could. It's not that we lack solution. We lack the capacity to put the solutions into play at scale. Ant that takes political will.

We need to get better at go and we have to work at fixing our attention. We need to work on that personal-- but it's also.

Rob: In Big Disconnect you describe how people think they are engaging in bottom up and using bottom up companies, but they are really top-down. Can you talk about email and petitions

The single best email is only when a small group of people have a big, big, big list-- Dave Carp calls this passive democratic engagement. They use the its to get a sense of what members care about. it's not a very strong kind of engagement. That's why I talk about thin engagement.

Tuned to operate based on what people click on, which leads to 'clicktivism"

Rob: Talk about signal to noise, which Clay Shirky also talks about.

Petitions work best at the local level. If a mayor gets two or three hundred petitions in a small town,

Rob: you mention in the books that corporations and businesses are affected more.

Rob; You say "architecture is politics and coders are legislators." Can you explain what you mean by that?

Facebook is automatically throttling your feed-- sharing selectively.. When you tell people you're n to actually seeing all your friends posts, many people are shocked.

A site that I like very much, which is a great example of positive civic tech-- seeclickfix for non-emergency things that need to be fixed-- where it shows on a map, where people see what you wrote-- what's very interesting is that where a resident can post a comment on a problem, a city worker can report it's been fixed, but it's up to the resident to confirm that it's been fixed. This is a really important design choice. When you put that one little toggle-- into the hands of the citizen user you've shifted the power in a very important way.

Rob: Giving power to citizens is a bottom up value. Are there other values that you see.

persistence is a bottom-up value. We're all connected to a place and enabling that kind of persistence, identity and reputation to build up are important bottom up values. it allows you to hold people accountable. This gets to why transparency is so important. When govt does things in our names we should be able to see what it claims it is doing, then see the discrepancies. Without that we don't have democracy. i'm with jefferson-- rather have newspapers than government. The question of the control of our platforms is absolutely vital.

Rob: You say that most valuable piece of civic technology is the hashtag-- and it's not owned by anybody. Invented by Chris Messina-- saw that Twitter could be a very interesting community information system but it was flooded with noise and the problem was how to find the interesting information. He suggested to use the hashtag. Wildfires took place in san diego-- and people were sharing pictures and news and they started using the hashtag #sandiegofires-- and it became easier to find information for people searching through the twitter stream.

Rob: message for Lever and a Place to Stand-- sites using technology in a thick way.

What enables people to stay together and know each other in ways that are not fleeting.