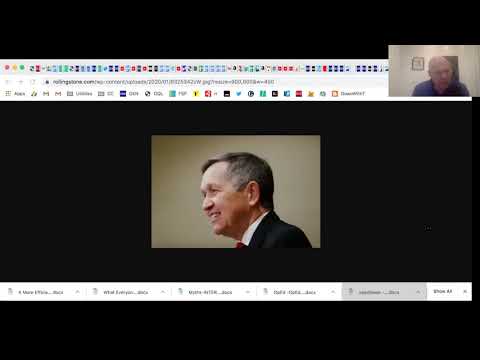 Matt Taibbi wrote, in his Rolling Stone article, "...the Kucinich platform was simple enough to fit on a playing card-sized pamphlet in 2004 is progressive mainstream. He preached universal health care, a repeal of NAFTA, an immediate pullout from Iraq, same-sex marriage, slashing the defense budget, and the decriminalization of marijuana.

"The Washington Post two years ago ran a feature noting how his campaign predicted the "future of American politics," and credited him with being tuned into populist undercurrents that later exploded in both the Sanders and Trump campaigns."

Kucinich replied to Taibbi, after being asked how he took such positions so early, "When I took all those positions years ago, I knew I wasn't going to win any friends," he says. "I didn't care because my obligation was never to the party."

And Kucinich said, "But" political parties can never be trusted. There are always some factors that are not consistent with the public interest."

I asked him about this comment and he replied, "The political system is rigged against anything that threatens the pharmaceutical and health insurance industries."

And , "Political parties are simply brokerages for wealthy interest groups."

And, "Wall Street ran the power in both the Bush and the Obama White Houses.

Guaranteed income, healthcare for all,

We need a policy where government can provide monthly stipends, need adequate PPE, Test, food security, and government doesn't pay any attention to logistics. And we need to deal with the mental and spiritual aspects.

Wealth has been achieved through financialization.

What's YOUR idea of wealth?

Taibbi reports that when you were on the road campaigning for president, you'd read. What are the books that have touched you the most. What have you read recently?

The Great Influenza by John Barry

He's working on his book, Courage to Survive and a new book, The Division of Light and Power.