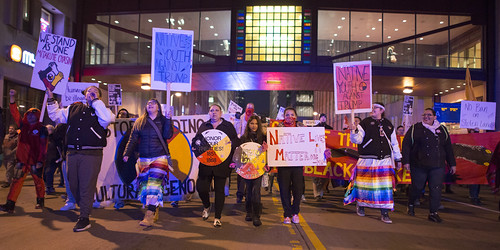 Minneapolis Against Trump march. What more can we do?
(Image by Fibonacci Blue)   Details   DMCA

I've read that in our present situation we may be better off creeping back to the Mother Country, the UK. It is graciously offering refuge to at least some of the people of Hong Kong, opening its borders to them.

We can stay where we are until the covd19 threat abates, of course. And just graciously surrender to their ownership and gladly pay taxes on tea and whatever equivalent there is to stamps, these days. I'll pay.

Like the situation of the people in Hong Kong, a would-be dictator is trying to limit our freedoms. But we have a chance, gruelingly hard work, to defeat him in November.

Then we won't have to dream of becoming a colony again.

The how-to's have been published in a number of outstanding books this year and there are many feasible guidelines. Believe me. They all embrace the simple guideline of my forthcoming book "Ballots or Bills: The Future of Democracy":

Become an activist. This can be accomplished in your living room or out on the streets or in offices, depending on your location and its rate of infection.

There is such a long list of to-do's once "we" win in November that if you remain on your living room couch you must remain an activist. There are many phone calls to make, so of which will be answered, if answered, by dumb hostility or even intelligent (?) hostility. College-educated hostility anyway. Ouch, it hurts. One hostile response on a hostile recorded message ends with "This is a Republican household." This answering machine I've reached more than once when participating in a phone bank when I lived in DC.

Another point that I've read countless times, as you have: The founding fathers wrote the Declaration of Independence and Constitution for people of their social class and status: propertied white men. (Women were allowed to vote for a brief period in New Jersey, for about twenty years, before they lost the franchise. So could African Americans if they owned property. So I'm proud to hail from the Garden State, for reasons in addition to Thomas Edison, Bruce Springsteen, and the Four Seasons.) The arc of justice has bent toward and away from that principle.

A loner among the founders was Tom Paine, who opposed slavery and championed human rights for all. It was he who kindled the Revolution, according to many, with his Common Sense pamphlet. He didn't like Quakers because they refused to fight against the British even though they were refugees from its religious intolerance. And he didn't like Jews. I stopped reading his complete works when I got to that. Even George Washington championed the rights of Jews, though he owned slaves and wasn't good to them.

So many of us are mixed bags, called hypocrites by some, moderates by others, etc.

Opponents of Trump must unite into a melting pot now, not just in November. First we must do everything we can to make sure that every vote cast is counted, and that's an uphill battle. Shall we fight back against the thugs the Trumpsters are training to threaten would-be Democratic voters at the polls, gun-carrying thugs? Will they be encouraged to use their guns? Might it be that blatant?

Let's fight for vote-by-mail, to keep USPS open, which is in jeopardy right now due to who else's opposition but the president's.

As others have already said, it's not so much a civil war as one declared by the president against the vast majority. He too wants a British association--witness that closed-mouth ear-to-ear smirk when he visited England and was received by the royal family at Buckingham Palace.

What more can we do to overthrow the dictator nonviolently in November, as activists all?

We can be sure of trouble beyond an election that chooses more human rights than fewer. I'm fairly sure that the U.S. military won't obey orders to sabotage the White House and take over the government on November 4. The Joint Chiefs stood up against his plan to send the military to oppose CHOP demonstrators, mostly nonviolent, after the most recent police murders of unarmed African Americans. But there will be other activity including lawsuits galore and a refusal to concede while Mr. Biden prepares his cabinet and administrators. Will the Trumps refuse to vacate the White House even thought they prefer Mar-a-Lago? No problem. Biden didn't even move into the Observatory Hill VP estate (near where I used to live, with an obnoxiously noisy motorcade passing my apartment building most days), but opted to commute to DC on Amtrak from Delaware every day during the Obama administration.

The question this diary/blog asks today is

What more can we do?