"I always find something wrong,

You been putting up with my sh*t way too long"

The pattern is clear. When it gets too hot in D.C., Trump runs away to Mar-a- Lago or a "campaign event." There he has crews, maybe some volunteer tools or some Russian or American Oligarch paid trolls. Anyone who runs for the presidency is "asking for it," even without being Insultron In Chief. So give it to Him!

I've been demonstrating on the streets in West Palm Beach with a tiny group of opponents. It strikes me that he should not go anywhere normalized with no demonstrative opposition. Just organize, carry signs, be peaceful, post watchers with air horns to warn at the ends of narrow streets! But stay away from his trolls. They are fairly Fa- but don't bring AntiFa on them. Just educate about the issues. 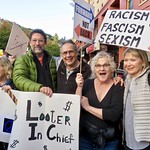 Related Topic(s): Antifa; Organize; Presidency; Public, Add Tags
Add to My Group(s)
Go To Commenting
The views expressed herein are the sole responsibility of the author and do not necessarily reflect those of this website or its editors.