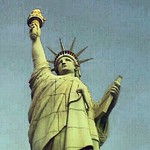 President Trump has told aides that he plans to refuse to leave the White House on January 20.

From a rosy point of view, at least he's acknowledging a boundary of sorts as well as the inauguration. And he's clever. What a side show that act of defiance will provide, even more than a counter-rally held elsewhere in DC on that day, though undoubtedly his diehard supporters will be out in large numbers at such events. If the weather is as cold in DC as it usually is on inauguration day, no one will want to stay outside. Perhaps that's why Mr. Trump opted for the sit-in gesture instead of the outdoor rally. Will he care how cold his minions may become? Don't bet on it. So many have died of covid.

Rage, rage against the dying of the torch (fax in Latin, which didn't give us the word fascism), Trump might have said were he of a more poetic bent, while we rejoice at the end of torture that is sure to follow even in a centrist administration. Torture for not being part of the privileged one percent. Even Giuliani noted how the privileged receive one sort of treatment, which works, to cure covid while the masses are dying in thousands each day.

So much will topple once Trump is gone, but so much more to do, so many possibilities--the amount of work necessary is staggering. The devil in me so wants to put up my feet to watch a good Hitchcock thriller and say the witch is dead, period, but if we don't realize that the threat of fascism is alive and well and angry, spewing flames, democracy is still a goner.

Keep on marching and slaving. Democracy implies and entails working 24/7, like another sort of flame in the fireplace without which we'll all freeze to death, the flame of freedom, Lady Liberty's very different sort of torch.

Related Topic(s): Death; Democracy; Fascism; Freedom; Inauguration; Liberty; President; Rage; Rally; Supporters; (more...) Torture; Trump; Weather; Work, Add Tags  (less...)
Add to My Group(s)
Go To Commenting
The views expressed herein are the sole responsibility of the author and do not necessarily reflect those of this website or its editors.