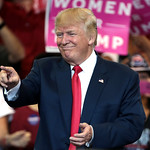 An odd couple indeed have been selected most admired man and woman of the year: President Donald Trump and former First Lady Michelle Obama.

Last year she held this honored position with her husband. Trump, meanwhile, holds a 39 percent approval rating, according to the same source, Gallup Polls. Some contradiction in that.*

That's one way to end 2020, with a man I personified as the sword of Damocles as source of the pandemic, here in the U.S. anyway, collecting such an accolade.

There are two more days of this turbulent year to bring more surprises and other more predictable events like an icy blizzard forecast for the Midwest with this silver lining--less socializing, less COVID spread.

Imagine the shattered dreams Moscow Mitch is responsible for today by blocking the $2,000 stimulus checks. We end this year with the divorce of another odd couple, Mitch and Donald. The Most Admired Man has reason in his narrow mind many reasons for hurling daggers at Congress and Mitch and his entire party as the year rumbles to a close.

I don't mean to assemble a commentary on 2020 that's been done and will be done far better than I can. I'm not in the mode of thinking outside the box to shed new perspectives on a miasma.

But those of us still here, 999 out of 1,000 souls in this country anyway, have some reason to be thankful, at least if we haven't lost close relatives or friends.

If we're not entirely crippled by the lapsed economy

If we're not COVID patients in overcrowded facilities fighting for life

If we're not low-income populations, whose suffering eclipses most others'

"Normality" as we know it was severely curtailed this year. All those wonderful luncheon outings and other social gatherings that so energize and inspire. All those family gatherings. All those shopping excursions, all the traveling. All the cultural events, from sports to symphony.

The structure of American life so shaped by the office environment. Alas for the extroverts stuck at home! Others who thrive going somewhere else every day!

The resilience of the human spirit?

The resourcefulness we're capable of?

The heights of heroism displayed by employees in healthcare and other vital human services persisting at their jobs when they'd be far safer at home?

The depths of blind heartlessness a country's leader can descend to?

I'm quarantined until I can get a vaccination. Used to working at home as a freelancer, no social butterfly, I'm probably less affected than many and business has boomed this year for me, so I'm fortunate. I'll be warm this winter though bored. I'll be well fed. I've donated more to charities than ever before in my life and it feels right.

What to conclude about 2020? Will grandchildren marvel at tales of travail? Or will they be wallowing in the damage wrought by global warming, another sort of scourge, but one we're capable of controlling--theoretically more so if the presidential transition does occur and a more environmentally concerned leader takes over.

It's new to be wishing away the first 20 days of 2021, wishing away my life as someone old enough to cherish each day.

There are the Georgia senatorial elections on January 5 and the inevitable controversy that will result, the Electoral College gathering on Epiphany, then an Inauguration Day that promises conflict and possible violence.

Perhaps we should put off New Years Day until January 21: so much of the first 20 days really belongs to 2020.

With Trump as most admired man of the year, we can wonder if human values have tanked in 2020. How does this decision, ultimately speak for us? This may be a fleur du mal for Trump and the flowering of evil for many others, un mal flourrisant.

Billy Graham was voted to this spot the most times of anyone, by far, with Ronald Reagan a distant second. Pope Jean Paul II did well, as did Jimmy Carter. Among women, it's been Eleanor Roosevelt, Jacqueline Kennedy Onassis, and Hillary Rodham Clinton. Most years the president and his first lady have claimed the honors. (this info courtesy of Wikipedia)

Well, what to conclude from this? It's been a lousy year, ending with a lousy choice for this coveted position.

*(No mention of who was chosen "most reviled." I'd guess Trump also[!])

Related Topic(s): 2020; Conflict; Elections; Environment; Evil; Heroism; Inauguration; Obama; Pandemic; President; (more...) Transition; Trump; Violence; Year In Review, Add Tags  (less...)
Add to My Group(s)
Go To Commenting
The views expressed herein are the sole responsibility of the author and do not necessarily reflect those of this website or its editors.