Having come to the conclusion that both parties are so thoroughly corrupted by campaign financing that no real progress, not even protection of what remains, is possible, I've become a post - Democrat. Alert and semi-alert Americans are so beset in the media with distractions, without litmus tests we are likely to fall into the outrage sewer pit. 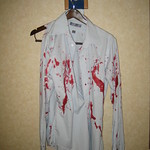 Now, why is the entire Lamestream media, particularly TV news, all of it, ABC, CBS, NBC, FOX, MSNBC, CNN amplifying the wave instead of investigating and providing at least mention of compromises, solutions, improvements? If you are sick of seeing the bloody shirts waved, tell the media as well as the punks waving them!

I'm only one person, a bold, old scold, with one vote and no money, but here are some of my personal litmus tests for candidates for the Presidency and congress: 1) I will not vote for any candidate who does not vow publicly to work for election reforms that assure the winner of the presidency is the winner of the popular vote! This would be a tremendous, expensive campaign, but whether it's by Interstate Compact or Constitutional amendment, it must be pursued vigorously.

2) I will not vote for any candidate unless s/he vows to vote for termination of the Authorization to use force in the Middle East. S/he must vow to work to choke off funding and absolutely end all U.S. military presence in Iraq and Afghanistan and all further financial aid to the corrupt colonial governments we have installed there. If that happens, maybe in a hundred years Jihadi's will have cooled down enough to stop revenge terrorism. 3) I will not vote for any candidate unless s/he vows to sponsor Congressional creation of $trillions of greenbacks for a large program of infrastructure building and urban - rural redevelopment. It would have to employ at least several hundred thousand Americans at family - supporting wage (at least $20.00 hour.) Work on development can be retro-technological, i.e., the least skilled could demolish abandoned houses in inner cities and rural meth towns.

Related Topic(s): Greenbacks; Media; Money, Add Tags
Add to My Group(s)
Go To Commenting
The views expressed herein are the sole responsibility of the author and do not necessarily reflect those of this website or its editors.