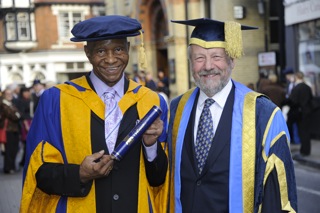 On Tuesday Oct. 9, Robert King received an honorary Doctor of Laws degree from Anglia Ruskin University in Cambridge, United Kingdom, for his achievements as a civil rights campaigner (view reports by the BBC and Cambridge News). At the bottom of this email is the full text of the speech made by King at the ceremony, which moved the audience of over 2,000 to a standing ovation.

While in the UK, King will also be appearing at other events, including:

--Caged in the USA: What will happen to individuals if extradited to the US?, in London, on October 18, at 7pm, organized by Cage Prisoners (read more here).

King will also be speaking in Chicago on November 9 (more info soon).

RELATED:   HRC Coverage of September 18 Rally and Hearing Against Solitary in Philadelphia, PA, with Robert King

King's book is described as "a story of inspiration and courage, and the triumph of the human spirit. The conditions in Angola almost defy description, yet King never gave up his humanity, or the work towards justice for all prisoners that he continues to do today. From the Bottom of the Heap, so simply and humbly told, strips bare the economic and social injustices inherent in our society, while continuing to be a powerful literary testimony to our own strength and capacity to overcome."

Read more about it here.

The new film by Angad Bhalla, documenting the collaborative project between Herman Wallce, of the Angola 3, and artist Jackie Sumell, will be shown at the New Orleans Film Festival on Oct. 14 & 15 (buy tickets here).

The film's announcement says: "The injustice of solitary confinement and the transformative power of art are explored in Herman's House a feature documentary that follows the unlikely friendship between a New York artist and one of America's longest serving solitary prisoners as they collaborate on an acclaimed art project."

Copyrighted Image? DMCA
This ruling will be the focus of an event in London on Oct. 18, with Robert King.

In a recent article about the ominous ruling in the case of Babar Ahmad and Others v The United Kingdom, Chris Hedges reports that "the ruling of the European Court of Human Rights, handed down Sept. 24 after the men requested that the court block their extradition, in essence certifies that U.S. prison standards are compatible with European human rights. This opens the door for any European nation receiving extradition requests from the U.S. to swiftly turn prisoners over to U.S. authorities. The ruling came despite the fact that 26 human rights groups including the ACLU, the Center for Constitutional Rights, and Human Rights First supported the prisoners' contention that they would be housed in inhuman conditions in the United States. The human rights groups predicted that the court's ruling would have "serious implications ... for legitimizing the use of conditions of confinement that violate human rights.'" Learn more: CagePrisoners.com

This important case has been the focus of two previous interviews by Angola 3 News: Do US Prisons Violate European Human Rights Law? and War, Prisons, and Torture in the US & UK.

Copyrighted Image? DMCA
Amnesty International Issues Scathing Report on SHUs and Solitary Confinement in California Prisons
An important new report by Amnesty International has concluded that "the US state of California must make substantial changes to their prison isolation units and halt the inhuman suffering of thousands of prisoners."

The Edge of Endurance: Conditions in California's Security Housing Units is based on exclusive access gained by Amnesty International to isolation units in California and explores the conditions of confinement endured by more than 3,000 prisoners - including 78 who have spent in excess of two decades in isolation.

"The conditions and length of imprisonment in California's isolation units are simply shocking...Recent reform proposals do not go far enough to address Amnesty International's many serious concerns with California's long term isolation units; if further changes, such as those proposed in detail in our report, are not incorporated into these reforms, California would still fall short of international law and standards for humane treatment of prisoners and the prohibition of torture and other ill-treatment," said Angela Wright, US Researcher at Amnesty International who visited a number of prisons in the state.


Boxed In: The True Cost of Extreme Isolation in New York's Prisons

Another hard-hitting report about solitary confinement in US prisons has just been released by the New York Civil Liberties Union, who explains that "the NYCLU conducted an intensive year-long investigation to shed light on the use and consequences of extreme isolation in New York prisons. Our study involved communication with more than 100 people who have spent time in extreme isolation. We spoke to prisoners' family members and corrections staff. We analyzed thousands of pages of official records. And we found that New York's use of extreme isolation is arbitrary, inhumane and unsafe."

Read the full report and learn how to take action here. 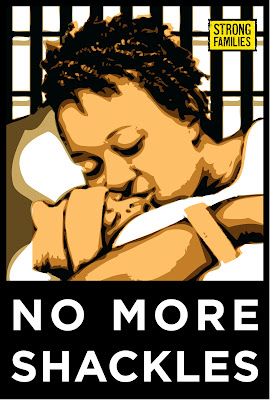 In early September, to help publicize the grassroots campaign supporting the AB 2530 bill that bans shackling of pregnant prisoners, Angola 3 News published an interview with Birthing Behind Bars co-founders Tina Reynolds and Vikki Law , where they explained that this "bill is significant because it prevents the CDCR from shackling and restraining women during any stage of their pregnancy, not just during labor, delivery and recovery. It also forces the CDCR to inform women that they have a right not to be shackled or cuffed behind the back during the entirety of their pregnancies."
Learn more about the shackling of pregnant prisoners at www.BirthingBehindBars.org.

As the only freed member of the Angola 3 I am honoured and humbled to be accepting this honorary Doctor of Laws degree. I am also delighted to have this honour of Doctor of Laws conferred upon me by Anglia Ruskin University. I have been asked to say a few choice words - and I want to say WOW.
It is great to be standing here - in the footsteps and shadows of so many graduates who have gone onto achieve great things. Some of you as well will become barristers, solicitors or as we would say in the USA - lawyers - who will also do great things.
My few choice words to you are: barristers or solicitors are people but they are also among that group of people in society who help make up the great intellectual gene pool of that society. You are the purveyors of truth, your enlightenment brings reasoning to a situation where reasoning often time does not exist: you bring vision - not just visions of becoming wealthy or famous but visions for a better world.
We live in a world that was meant to be perfect but has been made imperfect by people. This present state of affairs is also perpetuated by learned but uncaring persons. However as caring barristers and solicitors, my encouragement to you would be - you can help to change this situation by not only becoming purveyors of legality but also purveyors of morality as well. For often times, legality is void of morality.
The country where I was born - America - we give legality too much deity. We deify it and make it holy. When we give legality this kind of god status we err. In the American political arena oftentime politics is void of morality. A case in point, is the history of slavery in America. It was not until people began to see slavery as being reprehensible and amoral that it was abolished, as we know it.
My evolution began in prison - in Angola State Penitentiary, in Louisiana - in an 18,000 acres former slave plantation. My experience in a 6 X 9 foot cell for 29 years in solitary confinement taught me the difference between legality and morality. It made me realize that despite the fact that the 13th amendment allegedly abolished slavery, I concluded that slavery was never abolished. I learned that a person could be actually innocent of a crime but convicted legally and that this person would be designated a legal slave - as it was in 1864 where the constitution decreed that if you were black being a slave was your lot. Modern day slavery is alive and well in America but it has taken on a different form - from the plantation to the prison.
So in accepting this award, I am mindful that slavery still exists in America. A case in point, are my 2 comrades - Albert Woodfox and Herman Wallace who are now serving their 40th year in solitary confinement - and tens and thousands of others who have also been unjustly convicted but remain in prison in America in slavery. Unfortunately, we have to be mindful that America's style of justice often finds itself on the shores of England; high incarceration rates, highest number of life prisoners in Europe, the privatization of prisons, increased use of solitary confinement and other miscarriages of justice.
The struggle for a more moral and just society continues. It rests upon your shoulders. The vision for morality also continues. The quest for a better world continues as well. Please be visionaries, purveyors of morality and justice.

Thank you Anglia Ruskin University for this honorary letter of recognition.

Over 40 years ago in Louisiana, 3 young black men were silenced for trying to expose continued segregation, systematic corruption, and horrific abuse in the biggest prison in the US, an 18,000-acre former slave plantation called Angola. In 1972 and (more...)
Related Topic(s): America; Extradition; Extradition; Justice; Justice Delayed; Justice Denied; Justice Department; Laws; Newsletter; Prisoners; (more...) Rights; Slavery; State; Torture, Add Tags  (less...)
Add to My Group(s)
Go To Commenting
The views expressed herein are the sole responsibility of the author and do not necessarily reflect those of this website or its editors.