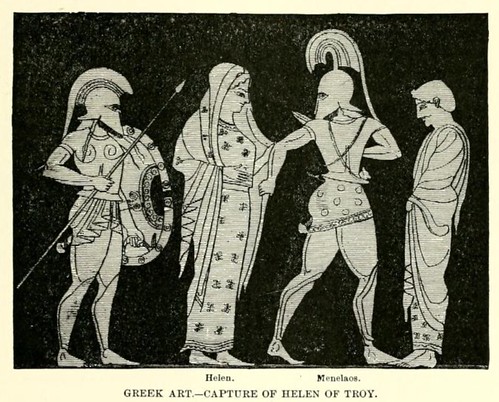 Does Homer prefer one of his chosen protagonists, Achilles or Odysseus, over the other? Or is it the Iliad's quintessential antihero Thersites, the lone commoner among the Greek troops who dares to speak his mind up against Agamemnon? His ugly features and single tear running down them are as poignantly described as the death of more prestigious fighters, with anatomical damages so graphically portrayed. The latter include tangents leading back to idyllic home scenes and beloved family who will mourn this tragic loss of youth in its prime and hopefulness. All these are replaced by heroic feats that elevate the victims, though most locally rather than featured in other famous epic narratives.

Thersites's suffering occupies just a few lines, while those of the other uncelebrated victims spread over lavish flashbacks.

Homer loves these victims, even Thersites, whose name encompasses bravery rather than his inferior caste status. What was he doing there anyway? To anticipate the more democratic age that will follow in Athens? Hard to say. But Thersites is honored with a beating by none other than Odysseus, one of the two heroes Homer favors with celebratory epics, the other being Achilles himself, of course.

As to name significance, Homer's favorites' names both imply pain: Achilles being cognate with "ache" and Odysseus's name indirectly entered our language as its opposite: "anodyne," the "odyne" meaning "pain."

Both are givers and receivers of pain, though Homer associates this with Odysseus's name, using the figura etymologica "odyssao" and others more often than "achos" suggesting Achilles' name.

A word for pain occurs close to the beginning of both epics: "algea," suffering, in the Iliad, and the same word in line 4 of the Odyssey. But Odysseus receives the pain while the wrath of Achilles inflicts it, in these opening lines anyway. Odysseus's pain refers to his twenty years of wandering after the ten-year war while, in the Iliad it refers to the tenth (and last) year of the war, when Agamemnon originates Achilles' wrath by ordering that he give up his beloved concubine/slave Briseis.

But why is it important to ask which hero Homer favors? It is to ask, perhaps, if the immortal bard preferred happy to tragic endings to life. Odysseus will reach home and ta empeda panta (everything that is his) while Achilles will celebrate his beloved Patroclos with funeral games and then grant literature a scene more poignant than Odysseus's reunion with Penelope: Achilles' compassionate reception of his arch foe's bereaved parent Priam. The Odyssey also ends with a meeting up with an old decrepid man, his father Laertes, but the old man has more reason to rejoice with his son's homecoming that Priam does with the return of Hector's corpsethat the gods kept unblemished despite Achilles' vicious attempts to defile it.

Ultimately Odysseus wins a triumph regaled in literary history while Achilles gifts it with a less renowned but tragically stunning moment in counterpoint to the hideous violence against Hector; Odysseus's reunion with Penelope also succeeds hideous violence, and so we have two juxtapositions of violence with its inverse, in counterpoint, perhaps, to the Trojan War's origins with love leading to violence, but that irony is strictly tangential to my theme, except that Agamemnon's "abduction" of Briseis catalyzes a war within a larger war also catalyzed by abduction of a love object.

Homer favors suffering over love scenes, though the latter weave in and out of his opus delightfully, celebrated in the recurrent formula "mingled in sweet love." The formulae characterizing battle scenes are far vaster in number!

Odysseus suffers more than twenty years, even with homesickness in the delightful arms of the witches Circe and Calypso, which affairs consume eight years of his travels. Circe sends him to hell while Calypso sends him to pompe (return home)-land, Phaeacia.

Achilles suffers first over Briseis, with suffering compounded exponentially by Patroclos's death, and this anticipates his own prophesied demise, so that Homer juxtaposes moribundity--to violence--with the "peaceful death out of the sea, in old age" that is prophesied for Odysseus.

Ultimately, the dichotomy I'm drawing between happy and sad endings in Homer may be beside the point if not false. Odysseus is rewarded while Achilles suffers incalculable loss. Deservingness doesn't enter in. But to argue that both fates are predetermined is beside the point. Homer could do what he wanted with the content and the tradition, in my opinion.

Both heroes inflict incalculable violence and pain on their victims but, I argue, Achilles loves better, whether it's Briseis or Patroclos, but both losses trigger their inverse and, as to who's more violent, I'd say the equation is equal. Achilles' own violence lies dormant throughout much of the Iliad, as does Odysseus's throughout much of the Odyssey, but when the wrath meets its objects, close your eyes and cringe if not vomit. Homer, as I've noted, doesn't spare us the details.

Or, to put it slightly differently, Achilles' love is more poignant. What triggers Odysseus's wrath is the violation of his empeda panta (everything that is his), not just his wife, while Achilles' wrath focuses on the loss of two love objects.

The genres within epic differ: a war account versus a nostos, a song of return. So the larger question may be, which genre does Homer prefer? If it's relevant. But more to the point, which turns out to be who loves better, why dwell on that? Is it machismo versus tenderness, boiling down to male versus female values? Which has gone on to rule our culture? "Violence is the sire of all the world's values," opines the poet Vachel Lindsay. And I maintain that he is correct.

And that may cast in irony the fact I've dredged up that Achilles is portrayed as the better lover. In Homer, violence takes up far more space than love, but his love scenes stand out eternally in literature. I have argued that the Iliad is the greatest antiwar poem ever created. It deals with violence so graphic as to induce vomiting. So it's ironic that subsequent civilization chose violence, machismo, over love. The Aphrodite versus Ares theme pervades literature and life but Ares prevails, and so our civilizations, all of them, are doomed.*

I venture to say that Aphrodite's victory might have saved us, all of us, whatever culture we partake of, even though the dichotomy implies reciprocity. We should have let Love conquer All, Virgil's immortal claim.

But alas, he was wrong.

**In the Odyssey, in book 8 (Phaeacia), the bard Demodocus spins a tale of both these gods being trapped in bed together, cheating on Aphrodite's husband, Hephaistus, who created the trap. Both war and love get their heads banged together in this pivotal burlesque, I believe.

Related Topic(s): Dawn; Decadence; Hero; Heroes; Heroism; Heros Journey; Homer, Add Tags
Add to My Group(s)
Go To Commenting
The views expressed herein are the sole responsibility of the author and do not necessarily reflect those of this website or its editors.