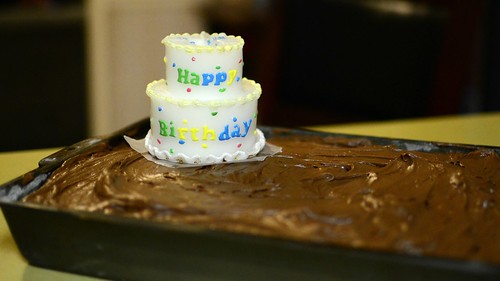 Birthday Cake
(Image by slgckgc)   Details   DMCA
Yesterday was my birthday. I'm not much of one for celebrating birthdays, but last night, I realized it could have been a good reason a good peg to hang fundraising and paid membership promotion on. I blew it. Chalk it up to my brilliant fundraising skills.

So, here it is, a day later and I'm still going with it.

It's become much harder to keep OpEdNews going. Ads used to pay literally ten times as much as they do now, sometimes even more. It enabled us to commission polls, and to pay our bills.

This year, I've racked up credit card bills and debt to keep things going. It is not sustainable.

The only reason I am getting by at all is because I receive a small monthly amount from social security. But the credit card debt is rising.

So, I'm asking you to please help. Make a donation here.

Or buy a membership-- ideally, a lifetime membership here.

But please, if it's been a while or never since you donated or purchased a membership, do help.

Related Topic(s): Birthday, Add Tags
Add to My Group(s)
Go To Commenting
The views expressed herein are the sole responsibility of the author and do not necessarily reflect those of this website or its editors.