First Woman Nominee for President by a Major Party? 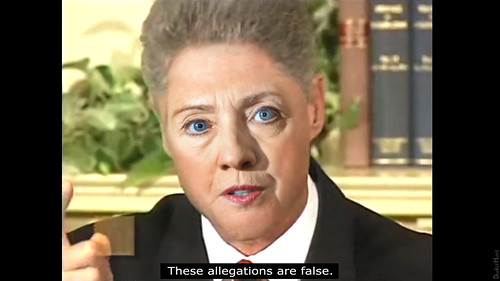 Billary
(Image by DonkeyHotey)   Details   DMCA
Before my fellow females throw their hats into the air glittering with confetti over Hillary Clinton's ascent, let me throw in a few wet blankets.
Not a male chauvinist myself, I cringed over those photos of her as SoS falling asleep at meetings and looking fatigued as God's wrath. She was buckling under the stress.
But consider this: she's got Bill and he's not half as "out of it" as he's pretending to be. He simply doesn't want to revisit a scene of one scandalous grand jury after the next, culminating in you-know-what. One might deduce that he was buckling under the pressure. In her autobiography "Living History," Hillary complains about those grand juries awaiting their every return from triumphant tours overseas.
It's a tough job.
First female president? Bill would have us think so. More likely, first president to be married to a past president.
And you know what that means.
There are worse things around than two presidents for the price of one--given the extraordinary issues both here and abroad in dire need of intervention.
Vote for the hermaphrodite Billary--I certainly will, if Bernie doesn't make it. First one in history, after all.
As an ultra-conservative friend of mind used to respond in any dialogue over political issues: "Consider the alternative."