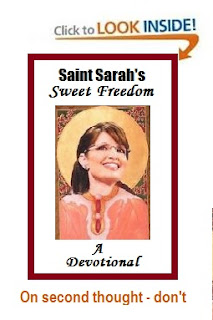 Yes, she's gone and written another pseudo-book, in pseudo-literary style. She had to, you see, because she is, after all, the gift that keeps on giving to late night talk show hosts and snarky writers like me.

Joining the ranks of The Book of Common Prayer, The Oxford Book of Prayer, and Coffee With Jesus, Sarah Palin is penning one of the most noteworthy and inspirational books of modern times.

That's how a fevered, overworked publicist might promote Sarah Palin's new book, Sweet Freedom: a Devotional, but a publicist less prone to use such overheated hyperbole just came up with this:

The future publicist, however, may not have as much of a problem as Mrs. Palin's editor (or fleet of editors). Dealing with her, her commandment that absolutely nothing be edited in the first place because everyone wants to hear her unvarnished wisdom, her innovations ("Will the book light up? I read something about illuminated manuscripts.") and her insistence that God told her to write whatever she wanted.

We can only guess what the editor has to struggle with. For example, the "list of meditations" might include:

I Can See God From My House
Meditating On The Divinity Of A Mooseberger
The Bridge To Nowhere Was Really A Bridge To Somewhere In My Mind
Immaculate Conception Be Thou My Goal
Abstinence Is Not Only A Virtue, But A Divine Propaganda
And ...
The God-Given Brawl

And interspersed between these deep thoughts are Mrs. Palin's insights are absolutely de riguer on the matters of:

Parenting: "Good parenting can't happen without good cash - and lots of it."

Before we take up a collection for the poor editor's psychiatry and hospital bills, we
need to remind him/her that their profession was chosen - they were not born that way and they can choose to opt out of the project any time they want.

I think I heard a door slam at Regnery.

Rev. Dan Vojir is has been writing/blogging on religion and politics for the better part of ten years. A former radio talk show host (Strictly Books " Talk America Radio Network) and book publisher, Dan has connected with some of the most (more...)
Related Topic(s): Prayer Book; Sarah Palin; Sarah Palin; Sarah Palin And Her IQ, Add Tags
Add to My Group(s)
Go To Commenting
The views expressed herein are the sole responsibility of the author and do not necessarily reflect those of this website or its editors.