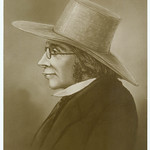 Just a quick note: On Cinco de Mayo, I celebrate not only Mexican-American culture and the victory of the Mexicans over the French empire in 1862, but also the birthday of the first existentialist philosopher (according to many), Soren Kierkegaard. It was my privilege to be project editor of his complete works, translated by Howard and Edna Hong from the Danish for Princeton University Press and completed in 1998, 27-some volumes, including the index volume. I came in about halfway through. After a nudge from a brilliant colleague, I began to immerse myself in the content of his philosophy as well as the intricacies of the translators' language and fell in love with SK the person and also became an outspoken critic, not of the church but of the Clinton impeachment followed by the Florida 2000 election fiasco. Words began to fly off the computer screen, becoming incandescent asterisks.

SK's 200th birthday was on May 5, 2013. What an intellectual rebirth the experience of editing some of his works was for me as well as the birth of my latest stint as an activist. It's his 205th birthday today. Where has existentialism taken us since 1813? The third essay in vol. 10, "Three Discourses on Imagined Occasions," "At a Graveside," reads to me like the last movement of Mahler's Ninth Symphony. It is my favorite of his writings.

It's been years since I've read SK. Too bad.

Related Topic(s): Activist; Birthday; Existentialism; Mexicans; Philosophy, Add Tags
Add to My Group(s)
Go To Commenting
The views expressed herein are the sole responsibility of the author and do not necessarily reflect those of this website or its editors.