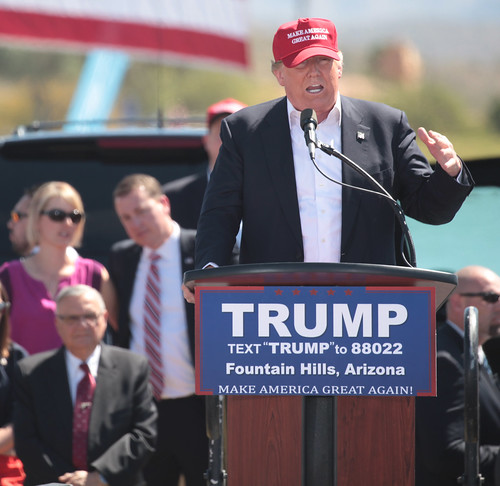 If you need proof of our Dumpster Fire in Chief's pathological hatred of America's legal system -- especially when it delivers a verdict he doesn't agree with -- then look at today's news.

Surprised? You shouldn't be. They were fellow Birthers, they campaigned together.

Payback was well and fraking nigh.

We should also not be surprised that the pardon came before the punishment. Usually it's the other way around, but 45 doesn't want to waste time.

Was Arpaio guilty of the crime? Absolutely. He broke the law loudly and gleefully -- ever defiant of the institution he so strongly claims to be a part of.

A paradox? Of course, but it's not without precedent, or fans.

America (especially White conservative America) just loves the maverick cop. In truth, we all sort of thrill to the Dirty Harry who upholds the bloody and brutal end of the law while ignoring its finer nuances.

Nuances like equal protection, innocent until proven guilty, and the ability to police the police.

In that sense, Drumpf and Arpaio are a match made in loose cannon cop heaven. The "MAKE MY DAY" hi-jinx that made Joe "America's Toughest Sheriff" is the sort of red meat 45 uses to lure voters to his camp and keep them.

It's also the gospel the President preaches as he speaks out of both sides of mouth on the law. On one hand, he's happy to be it. He's just not happy to uphold it... unless it helps him.

But the real problem with the pardon is not what it does, but what it reveals.

Sure, this pardon shows 45's support for a tougher stance on immigration. But it also shows racists all over America that he's in their corner, and can be counted on to do the "right" thing, even if he sometimes says the opposite.

So, if his temporary backpedaling on the hate march in Charlottesville had you fooled? Here's the proof that he was forced to talk nice during round two.

And you could explain his subsequent re-reversal on talking out his ass, as usual, except that then he did this.

The Pardon doesn't fix everything. Arpaio faces an uncertain future, and an expensive one at that (he's shilling for funds for his legal fees as we speak)

He will, however, not be facing it as a felon. And that's the tragedy, here.

Related Topic(s): Arpaio; Birthers; Donald Trump; Hate-Racism-Bigotry; Immigration; Law; Law And Order; Law Enforcement; Pardons; Presidential Pardon; (more...) Republican Racism, Add Tags  (less...)
Add to My Group(s)
Go To Commenting
The views expressed herein are the sole responsibility of the author and do not necessarily reflect those of this website or its editors.